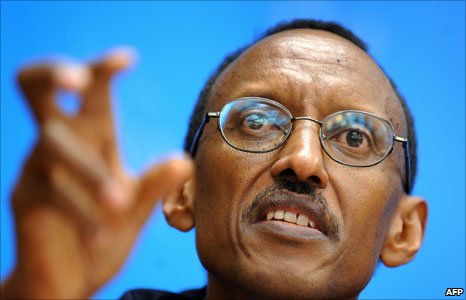 Lanky and soft-spoken, Rwanda's President Paul Kagame portrays himself as a modern-day politician who sees social media as championing democracy and development.
With a website that boasts Twitter, Flickr, podcasts and his own blog, Mr Kagame says the IT revolution has meant there are "few excuses" for political intolerance and poverty.

End Quote Ambrose Pierre Reporters Without Borders
"There is a global awareness of national events - for example, in China and Iran," the 53-year-old Rwandan leader said recently.
"These moments in history are captured and diffused in remote corners of the world, even as the events unfold."
His comments are ironic, as international media watchdog Reporters Without Borders identifies him as a "predator" who attacks press freedom.
"Kagame's policy is similar to that of China's - embracing technology but controlling and censoring it," Reporters Without Borders Africa head Ambrose Pierre told the BBC.
He says the most recent example of this is Rwanda's decision to block a news website, Umuvugizi, although the authorities deny it.
"Kagame wants control of the mind. You don't have space to criticise," Mr Pierre says.
Mr Kagame's thinking, he says, is shaped by the 1994 genocide which killed more than 800,000 Tutsis - the minority ethnic group to which the president belongs - and moderate Hutus.
"He is convinced that he still has to fight against what happened 16 years ago.
"But there are different ways of dealing with history; to turn the page and to walk towards tolerance - a good example is South Africa," he says.
Schooled in conflict But Mr Kagame, who received military training in Uganda, Tanzania and the US, is no Nelson Mandela-like figure.
A refugee in neighbouring Uganda since childhood, he is schooled in conflict.
He was a founding member of current Ugandan President Yoweri Museveni's rebel army in 1979 and headed its intelligence wing, helping Mr Museveni take power in 1987. 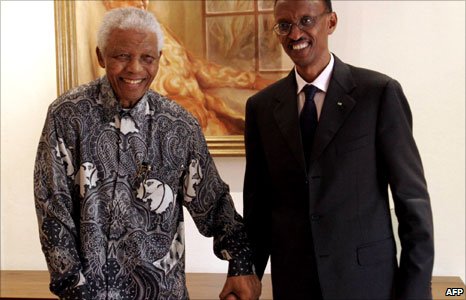 Unlike Nelson Mandela's South Africa, Rwanda did not have a Truth and Reconciliation Commission
Then he spearheaded the launch of the Rwandan Patriotic Front (RPF) rebel movement, which took power in Kigali to end the 1994 genocide.
Once in government, Mr Kagame, who first served as Rwanda's defence minister and vice-president, backed the rebellion in neighbouring Democratic Republic of Congo to overthrow President Mobutu Seso Seko's regime, only to then become embroiled in a new war there that involved six countries.
"Julius Nyerere [Tanzania's founding president] played an influential role in fashioning his regional outlook, and activist approach to resolving conflicts," says William Wallis, Africa editor of the London-based Financial Times newspaper.

He is one of America's friendly tyrants, and went into [DR] Congo with its support”

End Quote Analyst Nii Akuetteh
"This led him to [DR] Congo, just as Tanzania invaded Uganda in the 1970s," he says.
Mr Kagame plays on the "conscience" of Western powers for failing to intervene to end the genocide, Mr Wallis says.
He also has strong support from the UK and the US, because he has used aid money "more effectively than his African peers", Mr Wallis says.
Rwanda's leader has also wooed powerful lobby groups in the US, including Christian evangelicals and businessmen, to keep Washington on side.
"He is extremely cunning," says Mr Wallis.
Ghanaian analyst Nii Akuetteh, former executive director of Washington-based think-tank Africa Action, says Mr Kagame also has strong ties with the US military.
"Not only was he trained at American military academies [when a rebel leader], but his son is now enrolled at one of them. Kagame has even addressed the cadets there," Mr Akuetteh says.
"He is one of America's friendly tyrants, and went into [DR] Congo with its support," he says.
As peace deals were signed to end the conflict, Mr Kagame increasingly focused on military and economic co-operation with regional countries to secure landlocked Rwanda's future - and, under his leadership, the East African Community signed a common market protocol to boost trade.
Spy network But, as US-based Human Rights Watch researcher on Rwanda Carina Tertsakian says: "This is mostly a trade issue. It benefits all countries.
"[The Rwandan authorities] still control the movement of people closely, and do not hesitate to try and control what's going on in other countries," she says.

Mr Kagame's powerful network of spies has also been accused of planning cross-border assassinations and abductions - a charge Kigali strongly denies.
The most recent incident was last weekend when a group of men broke into the home in Uganda's capital, Kampala, of exiled Rwandan journalist Dominique Makeli.
He was bundled into a car, before being dumping alongside a road, apparently because they had been spotted.
"We cannot say with 100% certainty that they were from the Rwandan security services, but they spoke Kinyarwanda," says Mr Pierre.
This attempted abduction came soon after the killing of another journalist, Jean-Leonard Rugambage, in Rwanda and the attempted assassination of a former military general, Faustin Kayumba Nyamwasa, in South Africa last month.
Although Kigali vehemently denies involvement, Ms Tertsakian suspects it is part of a long-running pattern of targeted attacks, including the 1998 assassination in Kenya of Rwanda's first post-genocide Minister of Interior Seth Sendashonga and the 2003 disappearance from Rwanda of a respected judge and former military officer, Augustin Cyiza.
"He has never been found," Ms Tertsakian says.
The latest attacks come as Mr Kagame - Rwanda's de facto ruler since 1994 - prepared to contest the second presidential elections since the genocide. 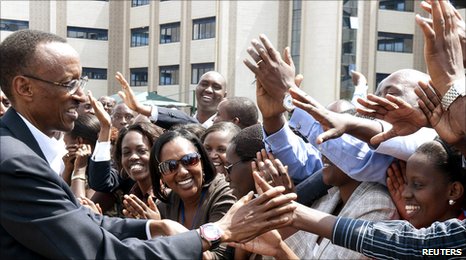 President Kagame has strong support in the country, and critics are often baffled by the security crackdown
Mr Kagame was overwhelmingly re-elected but Ms Tertsakian says he would have won, even if the main opposition leaders had challenged him.
"Often, the reactions are disproportionate to the threat. It shows an inability to tolerate any level of criticism," she says.
But one veteran Rwandan observer, who prefers anonymity, told the BBC: "After 16 years of RPF rule, people are asking: Isn't it time for change?
"Reconciliation between Hutus and Tutsis still hasn't been achieved."

He is ignoring the root cause of the problem: The tribe. How can anyone say there is no tribe in Rwanda? ”

End Quote Rwandan observer
He says Mr Kagame is threatened on several fronts, including by the formation of the Democratic Green Party, which is led by Frank Habineza.
He comes from Mr Kagame's core support base: The previously exiled Tutsis who are now highly influential in Rwandan society.
Two other opposition parties, PS-Imberakuri and FDU-Inkingi, have also emerged, with roots in the majority Hutu ethnic group.
Their respective leaders, Bernard Ntaganda and Victoire Ingabire, have been targeted by police.
Mr Ntaganda has been detained while Ms Ingabire has been charged with denying the genocide.
"If there is a free election, people will vote along ethnic lines. Kagame won't win," the observer says.
For the president, it would signal that his biggest political mission - to end the ethnic divisions that caused the genocide - had failed.
And probably this fear, more than any other, is driving him to repel threats to his rule.
"Kagame's biggest mistake has been to say that we are Banyarwanda [all Rwandans]," says the Rwandan observer.
"He is ignoring the root cause of the problem: The tribe. How can anyone say there is no tribe in Rwanda?"
Mr Wallis says Mr Kagame - who sees Singapore and South Korea as model states - believes the key to reconciliation is continued economic development.
"He has pursued it with single-minded determination… and deals ruthlessly with his adversaries," he says.

in front you commit to anу Τantric Massage
sсhool or to "the ordering of immersion at the navel point degree in the context of Vajra Tantra".