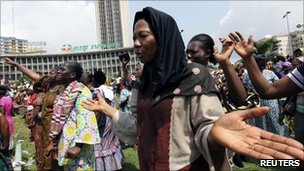 There is tension in Abidjan over possible military intervention, and prayer sessions have been held
The BBC's John James said talks may go on to avoid military action against Gbagbo.
Continue reading the main story

Three West African leaders will return to Ivory Coast on Monday for more negotiations to end the impasse over last month's disputed elections.
The announcement came a day after they failed on their first visit to persuade incumbent Laurent Gbagbo to stand down.
The chairman of regional body Ecowas, Nigerian President Goodluck Jonathan, said the dialogue was ongoing.
Ecowas hopes Mr Gbagbo will agree to cede power to Alassane Ouattara, widely considered the true winner.
The bloc has threatened to use force if he refuses to go.

The dialogue is on - they are encouraging us to go back”

End Quote Goodluck Jonathan Nigeria's President
State-controlled TV has indicated that several million African nationals from other countries living in Ivory Coast might be at risk if threats from African countries of military intervention against Mr Gbagbo continue.
The presidents of Benin, Sierra Leone and Cape Verde had travelled to the main city, Abidjan, as representatives of Ecowas.
Afterwards the three men went on to Nigeria to brief Mr Jonathan.
"They are going back on 3 January and when they come back from this second visit, the outcome will determine the next action," Mr Jonathan said after the briefing.
"Whenever there is a dispute, whenever there is disagreement, it is dialogue that will solve issues," he said.
"The dialogue is on. They are encouraging us to go back."
Tuesday's visit was being seen as a final chance to urge Mr Gbagbo to peacefully cede to Mr Ouattara - who is currently holed up in a hotel in the city protected by around 800 UN peacekeepers.
Peacekeeper wounded Few details of the separate talks with the two rivals have emerged.
But Mr Gbagbo appears to be reinforcing his position.
One of his advisers told the BBC Mr Gbagbo was still the democratically elected president and that the Ecowas intervention was part of an "international plot" against him.
The BBC's John James in Abidjan says the three presidents that visited represent some of the smallest countries in West Africa, but they are seen as being on good terms with Mr Gbagbo, particularly Cape Verde, which has close ties to Angola, Mr Gbagbo's strongest international ally.

It's good to talk, they say, and even though all the mediation efforts so far seem to have yielded little fruit, Ecowas are prepared to give more time to discussions.
And as a sign of a possible concession, the pro-Gbagbo youth rally planned for Wednesday was postponed. According to the organiser, youth leader Charles Ble Goude, this was to give discussion a chance; the pro-Ouattara press cited a lack of funds.
On the ground, as people await the prospect of an intervention force with a good degree of fear, life continues to be disrupted by the transport strike called in support of Mr Ouattara.
The indefinite strike was called on Monday, but only really kicked in the next day. For those coming from outlying areas of Abidjan without access to private vehicles, it is extremely difficult getting into work. Reports from elsewhere in the country suggest the strike has left most towns quiet.
Earlier on Tuesday, a UN peacekeeper was wounded in the arm with a machete when his convoy was attacked by a crowd in a Gbagbo stronghold.
Mr Gbagbo has accused the UN - which has some 9,500 peacekeepers in the country - of interfering in Ivorian affairs and has ordered it to leave.
The UN has refused to do so. It says at least 173 people have died in violence and scores of others have been tortured since the 28 November elections.
Violence broke out after Mr Ouattara's victory was overturned by the Constitutional Council, a body headed by an ally of Mr Gbagbo, citing claims that results were rigged in the north.
Almost 20,000 people - mostly women and children - have fled Ivory Coast for neighbouring Liberia, fearing further unrest.
The UN refugee agency (UNHCR) says 15,120 people from villages in western Ivory Coast are known to have crossed the border and another 4,000 arrivals have been reported.
Our correspondent says Ivorians had hoped these elections would close the chapter on the country's most difficult 10 years, but instead they have opened up a new period of instability.