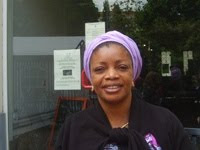 On behalf of the people of the Congo that I represent as an elected official, I thank you for your support and action. Your actions are a true manifestation of Dr Martin Luther King’s famous words when he said “Injustice anywhere is a threat to justice everywhere”

Your mobilizing the American public to send Hillary Clinton a birthday card calling on her to implement the Obama Law (Public Law 109-456) was a stroke of brilliance and creativity. The enforcement of this law, especially sections 105 and 107 can certainly play a constructive role in helping to bring an end to the conflict.

I am glad that you were able to secure a meeting with Ambassador Melanne Verveer. I met with her at the United Nations in March of this year, right when she was nominated as the Ambassador at-large for Global Women's Issues. During our meeting, I shared with her how the United States can best help contribute to peace in the region by holding its allies accountable for their actions, getting more engaged diplomatically, supporting political solutions as opposed to military ones, and providing support to local institutions, especially as it relates to the greater involvement of women in the peace process.

Again, thank you for listening to the voice of Congolese people and taking our message to the highest levels of power in the United States. Thank you for being a voice for the voiceless. Opinions expressed outside of the country are often presented as solutions to our problems, but you listened to us and have taken our suggestions to your nation’s leaders. We are forever grateful for your action of support and respect. Listening to our voices is the first step towards recognizing our common humanity.

My constituents thank you for your solidarity. Together, we know that with your continued support, Congo will achieve peace and human dignity and take its rightful place among the great nations of the world.

Click here to learn about the Dear Hillary Campaign!