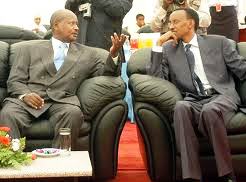 For some time now, the international community has described Uganda and Rwanda as Africa’s Superstars. Their leaders, General Yoweri Museveni and General Paul Kagame, have been variously praised as the new ‘kids on the block’ and a ‘new generation African leaders’.
It is now becoming clear that these praises were nothing but misrepresentations of reality by a self-seeking international community; a community whose main interest was to nature and impose two pro-western warrior-rulers capable of protecting the West’s economic and geo-political strategic interests.
Critical Ugandan and Rwandan journalists, academics, and opposition politicians have argued that in spite of the so-called “liberation” wars in both Uganda [1981-86] and Rwanda [1990-94], the political landscape in both these countries has been bedevilled by iron-fisted dictatorial rule, lack of democracy, and the rise of a minority war-mongering ruling class.
This group has badly failed to pacify and bring political stability to a region torn apart by war and civil strife. What the international community was seeing and praising were fake and unreal castles of change that are built on wet sand.
We are hearing loud and clear voices of decent in both Uganda and Rwanda.  These voices are becoming more and more defined by utter desperation and extreme anger at the status quo.  We are witnessing the emergence of a thoroughly radicalised citizenry who are prepared to stand up against injustice and brute repression.  And as history has shown, these are also people who are prepared to shed their blood for the causes they believe to be noble and righteous.
Signs of an impending revolt in Uganda

In Uganda, the September 2009 Buganda uprising which saw many demonstrating civilians shot dead by the security forces showed that thousands of simple Baganda people were ready to die in the name of securing their Kingdom from the threats of a hostile NRM government.
Even though these riots were eventually suppressed, they paralysed the capital city Kampala for days.  But Buganda riots also proved something very important.  It created doubt in our minds about the capacity of the regime to manage large-scale public uprisings; especially if they are organised across the country.
In Uganda today, there are real indications that senior military and police officers are being purged by the regime because it fears that these officers might be aligning themselves to the political opposition.  A recent call by an exiled former army commander to current serving officers to switch allegiances could be a signal of impending revolt in some sections of Ugandan army.
Uganda’s main opposition leaders have also publically warned of the coming political hurricane.  Col. [Rtd] Dr. Kizza Besigye and General [Rtd] Mugisha Muntu, both Museveni’s former military allies and now leaders of the Forum for Democratic Change, have threatened to force President Museveni out of power if the February elections are rigged.
Meanwhile, Dr. Olara Otunnu, a former UN Under-Secretary General who is now President of the Uganda People’s Congress and a presidential candidate in the February 2011 elections has also warned that the 2011 elections are Uganda’s last chance for peaceful change.
Signs of an impending revolt in Rwanda
Rwanda is also tittering on the brink.  And the one man to blame for that impending crisis is General Paul Kagame.  His opponents accuse him of orchestrating extreme brutality and political repression; acts which have left the people of Rwanda with no choice but to mobilise a new freedom struggle.
We are, accordingly, witnessing widespread volatility and disgruntlement among the military and security services. High profile army officers like Lt. Gen. Kayumba Nyamwasa, a former army chief ofstaff, and Colonel Patrick Karegeya, former chief of Rwandan Intelligence, have fled into exile and are now organizing the growing anti-Kagame opposition.
Amidst widespread arrests and repressive clampdowns, the political opposition in Rwanda has grown into a solid anti-Kagame movement.  It has embraced both Hutu and Tutsi opponents of the regime. The radicalisation of the political opposition has been exacerbated by President Kagame’s own dictatorial tendencies.
The last Rwandan elections in August 2010 were utterly shambolic and disgraceful. Opposition parties were denied the opportunity to campaign freely and simple Rwandese citizens were cowed into silence by threats and intimidation.
Before and after the elections, Kagame’s regime unleashed severe violence and repression against the political opposition. Mr. Andre’ Kagwa Rwisereka, the Vice President of the Democratic Green Party, was beheaded. Jean-Leonard Rugambage, a journalist who wrote about the attempted assassination of exiled General Kayumba Nyamwasa, was himself murdered in cold blood.
Several opposition leaders have disappeared, believed to be languishing in state jails.  Ms Victoire Ingabire Umuhoza, the head of the FDU-Inkingi Party, remains a prisoner of conscience in her own country.
What is the way forward?
There is an urgent need to save Uganda and Rwanda from impending catastrophe. Both Africa and the international community must act before it is too late. Violence and civil strife are not a new phenomenon in the Eastern and Central African regions.
But, failure to halt the rapid deterioration of the already dire political situations in Rwanda and Uganda could lead to a regional implosion that will surpass all past tragedies.  Please log into www.ugandacorrespondent.com every Monday to read our top stories and anytime mid-week for our news updates.
magombevincent@yahoo.co.uk