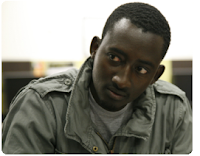 Photo:
Robert Mukombozi is an investigative Rwandan journalist exile in Australia. He is currently studying a Masters of Journalism and Mass communication at Griffith University.

Rwandan journalist, Robert Mukombozi, was yesterday refused entry into Kenya. This was revealed by BBC Kinyarwanda service in an interview with the journalist and by Umuvugizi newspaper.

It has not been established yet whether the journalists were acting in their own capacity or whether their position represented the Kenyan government. According to Mukombozi, the airport officials had a long list of Rwandan dissidents, with orders not to allow any of them entry into the Kenyan territory.

I am sort of confused why Kenya, a sovereign country would cooperate with another regime [Rwanda] to harass foreign journalists. Obviously, this goes against international law since Mukombozi is not a wanted fugitive. There is no Interpol arrest warrant issued against him. Just because the Rwandan government does not like his views would not (and should not) constitute a crime. Or is it criminal to be a journalist?

Kenya cannot act in an illiberal way just to maintain good relations with a despotic regime. This is a worrying trend since 2007 when Kenya sparked an international controversy by denying a visa to the Dalai Lama.

Mukombozi, a former journalist with the “Daily Monitor” now writes for the “The African Executive”. In 2008, he escaped Rwanda after surviving an attempt on his life.

Kagame is losing a grip on the country