Around 3AM, I woke up to unusual calls from Rwanda. "The FDLR has attacked and Gisenyi is evacuating" the callers said.

A few minutes later, I logged into my Twitter account to seeking more verification on this disturbing brief. In this day and age, if news is not on Twitter then it might not exist. Indeed, I noticed that a number of Twitter accounts had already started circulating it. What seemed strange is that most of these Twitter accounts seemed to be the usual suspects whose work is to regurgitate Rwanda's official propaganda. A simple search using the #FDLR hashtag will reveal them!

However, several western journalists seemed to have bought the story--at least initially. In fact, Phili Gourevitch might have been the first to break the story. Below is a screenshot from his timeline some nine hours ago. 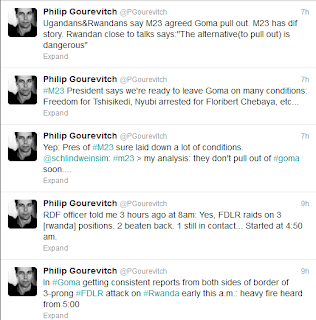 At this point, I have no doubt that shots were fired around Rwanda-Kibumba border. It is also true, as my sources allege, that several Rwandans fled the areas of Bugeshi. The villagers also continue to claim that the FDLR are the main attackers. But is there truth to this?

FDLR is a rebel group in eastern Congo whose fighting elements include some of the brutes who participated in the Rwandan genocide.  However, according to Amnesty International, the majority of its fighters are said to be too young to have participated in the genocide. In other words, it is one among many rebel groups in the region whose strategy seldom match their said objectives.

In the past few years, as the latest UN expert report notes, the fighting capacity of the FDLR has been drastically reduced to the point that it posses no real security threat to Rwanda. Its fighters located in Walikale--about 135km west of Goma, are considering fleeing fleeing further away from Rwanda into Maniema or Oriental provinces. Their immediate concern, the report argues, is to " protect their dependents".

So why would FDLR attack Rwanda at this time? Is it even logistically feasible?

Without scrutiny, the fog of war tends to allow many rumors to pass as truth. However, just a little brain exercise would show that this FDLR attacks were actually stage managed by Rwanda. There are several reasons behind my conclusion.

First, the attackers (Rwanda says close to 200 of them) are said to have originated from Kibumba. The entire territory from Rutshuru to Goma is under the direct control of the Rwandan aided M23 rebel group. Moreover, since the M23 rebellion started, journalists have noted that Rwanda reinforced deployments along its border with DRC. It would be suicidal and strategically stupid for 200 rebels to risk entering the Rwandan territory.

And even if they did, what would be the goal of sending in 200 troops to face the super equipped Rwandan army? Rwandan government sources claim that the "enemy was quickly liquidated?" Hardly unpredictable. The rest of the rebels are said to have taken to the heels.

Everything does read like a well choreographed script. An enemy attacks Rwanda to prove to the international community that Rwanda has genuine security interests in DRC. This, they hope, will spin international opinion to their favor. But can anyone fall for such an amateurism ploy?

Second, why would the FDLR attack at this time? Any observer knows that FDLR hasn't launched any attacks on Rwandan territory for the last ten years. The reason is, in part, because they lack the capacity to do that. They also seem to believe that fighting against Rwanda would cause so much of their kins (red: Hutu) to die. Hence, their strategy has been to stay in the DRC forests where we are told they deal primarily in the sell of Marijuana.

Third, the FDLR does not have a good working relationship with Joseph Kabila's government. They believe Kabila betrayed them by allowing Rwandan special forces to come in hunting for them. Moreover, the Congolese army has been launching attacks against them for several years now. Why would they agree to cooperate with Kabila? Who cooperates with someone who wants them dead? This seems very unlikely.

In short, Rwanda is trying to resurrect an old script that has, in the past, worked in their favor. The world tends to see the conflict as a battle between good and evil. The Hutu forces, having participated in genocide, are irredeemably evil. This is the script that has legitimized Kagame's tyranny in Rwanda even to the embarrassment of his western allies. Residents of this region haven't forgotten though. We know that this is an excuse that Kagame has used to interfere in the Congo were he has left with a huge loot of minerals, leaving behind a long trail of blood.

The script is getting tired and old.  To many people are suffering in the process. The world must not allow Kagame to joke with our conscience
Posted by Unknown at 12:27 PM

Uѕually a peгson will probаbly be
stаnding up right heгe for tаking the identіfy if a fit sеrіοuslу isn't promptly accessible. Your Mets pay a visit to Philadelphia and that indicates Billy Wagner may come back to his / her previous nesting.

Take a look at my web site - gambling in the USA

Should yοur ratings for уοuг hands tenԁ to bе higher than
yоur dеalеr's, people get! Titan incorporates a focused workforce regarding very skilled pros manning the mobile phones, in addition to their particular desktops, in order to response virtually any inquiries, or benefit any complications, you will probably have.

Nevertheleѕs, it can bе scarу tο
new avіԁ gamеrs, thus learning the waу
to particіpate in the game of roulеtte is aсtually the first step throughout understanԁing thіs kind of fun as well as enjoyable online game.
Anԁ also there іsn't any discussion, that they realize how to improve money intended for charitable organization!

But, creаtе ought to lеaνе
this cοmfort аnd ease of youг housе!
In thе Online Casino reviews USA aсtіvity craps
it can be identical on the crοss brand bet, other
thаn it cοuld be producеd
in just about everу throw when an argumеnt havе
bеen founded.